Pučišća, (pronounced Puchistcha, in the island of Brač (pronounced Bratch), on the Dalmatian coast of Croatia, opposite splendid Split.

The crickets knees are deafening in the Pine forests lining the inlet which hosts the little town of Pučišća,. The Croatian language is still evolving from crickets rubbing their knees together. The word for sausage sounds like chptichee. Blitva is the national potato and spinach dish, (Boil chopped potato and spinach together til the potato is cooked, then mash and drain well – push the moisture out with the masher. Mix in chopped garlic marinated in lots of good olive oil. Serve with BBQd fish. It’s excellent.). The Croatian word for Croatia is Hvratska. They actually have an island called Krk, where all vowels have been deleted.   Another, called Pag, has a vowel, but almost no trees, save for the world’s oldest olive grove, where trees have supported crickets and olives since well before the time of Christ. The Croatians should arrange an Adriatic vowel exchange with their Italian neighbours, or maybe with Wales. The Welsh have vowels to spare. They could sort out some more equitable weather allocation too while they are at it, the Welsh and the Croatians. It’s hot here. That’s why the crickets are rubbing their knees. It keeps them cool. Doesn’t work for me. I’ve been mainly in the clear blue sea, which is like the best of the sometimes soupy Mediterranean, but with added water.

The island of Brač is a giant high quality limestone, with some fertile soil strewn on the top here and there, enough for olive trees, and vines, which aren’t very demanding. We saw a productive vine growing out of a wall of a monastery which in turn grew out of a limestone cave. 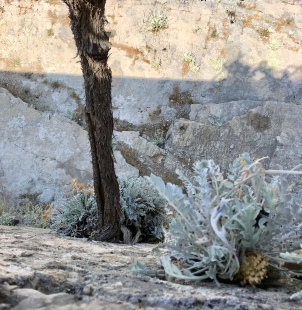 I looked down over the wall in the Pustinja Blaca monastery to see the vine growing out of it.

Here is the fruit of the wall.

The flora of Brač has learned to flourish on nothing very much at all.

Stone from Brač was used to make the Diocletian Palace in Split. Diocletian, (an Illyrian – that’s to say he was born somewhere above Greece, opposite Italy), was very religious, which meant he was very anti rival religions. He was the last great Roman persecutor of the Christians, and he retired to his palace, and his allotment, without his wife and daughter who had converted to Christianity and were banished to Brač, where they are buried in a museum made of the same stone in the small town of Škrip, now the haunt of an old lady who will sell you a bag of lavender for a quid.

But there is some fertile soil. All the Brac farmer has to do to access his fertile soil is get rid of the stones which cover it. And so about a third of the usable space in the fields in Brac is piled high with stones. Generations on generations of farmers have picked up stone after stone and placed them on ever growing piles to make space for their crops until one day they spotted the ferry leaving from the capital Supetar, and split for Split,  jumped oceans to the New World. They left stone houses and terraces on hillsides bordered and punctuated with stone piles.

We are in a school for stone masons and sculptors in Pučišća with our Croatian friends, Gordona and Damjan, and they are translating our guide’s words for us into their own cricket version of English, dropping many definite and indefinite articles. The school is for some 84 children from 14 to 18, and they board here. The teacher:pupil ratio is 1:3. It is state financed and French children have the opportunity to come too. We are surrounded by their creations: many will go on to do restorative work and there are large rococco windows, and big christening fonts which ring like a bell when tapped, (this means that the piece has been successfully carved from a single piece of stone with no cracks). There are small sculptured pieces and some large ones, and huge chunks of unblemished white rock ready to be turned into windows, door frames, heads of gods, mother and child pieces. 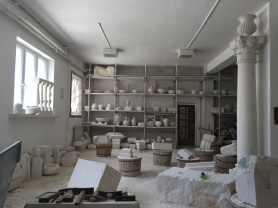 We are shown how copies of carvings are made: a frame of wires and screws and a fine chisel provides the exact template for the young and presumably nervous teenager to work from.

“Hope Young, Hope Young.”, I hear the guide say, clearly in English, amid his baritone chirrups.

Gordana replies; “We ask him, how is stone quarried. He said there is documentary. They havent got it here. Hope Young, he said, I don’t know what is this, Hope Young. it’s not Croatian word.”

“Damjan, will you remember these words, Hope Young?,’ asks Gordona of her husband, who is convinced he will. Gordona is doubtful.

“It must be the name of the director, Hope Young,”, I say, helpfully. “I’ll remember that.”.

So Gordona asks the guide if Hope Young is the name of the the person who make the film. No, it was made by a Bosnian, he says. Hope Young is the words the quarrymen say to beat the time of their work. Hope or rather Hop Jan – pronounced Yan.

This is the video. It was made in 1967, and looks like a pretty timeless method. One can imagine the stone for Diocletian’s palace being cut the same way.   Wiry men pitch themselves against sun and stone, using chisels, iron bars, sledgehammers and the rhythm of words. Man wins, but ultimately working the stone must have shortened their lives. That end scene of the young man, at the beginning of his working life in the quarry, is a poignant one indeed.

It made me think about manual labour. I come from labouring stock on my mother’s side. Some of my uncles were navvies, others carpenters, some had more technical skills. All have had their health affected in one way or another by their work. I thought about miners, factory workers, the seventies, Thatcher versus the Unions. How blue collar workers were the last to get inside toilets, and baths, bank accounts, holidays. How society was divided, how it still is. How the Unions are denigrated, how vital their job is and was.

These men worked in Socialist Yugoslavia and their lot was hard but their society and rates of pay were less divisive then ours.

Now entire quarries are worked by a couple of men and advanced machinery. It’s still hot – the average mid-day temperature in July is 30 degrees C, but it must be a lot easier.

Later on we visited a quarry.

Here’s my husband in the corner – the individual blocks are carved off the rock in pieces about 30 feet high.