Life Going Down The Pans. Part 3. The Chemist.

In which I try to explain another reason why I don’t have enough energy to complain to Victorian Plumbing about their non-flushable loo pans.

11 am. Mum’s pills are dispensed monthly in packages called dosset boxes. There is always some anomaly and I have learnt to take nothing for granted.  I had already popped in on Saturday, to tell them we would run out by Monday morning, but they weren’t ready.  I had made up Mum’s Monday morning pills from spares  that I had at home.

“Really sorry, they aren’t quite ready. Come back after lunch?”. 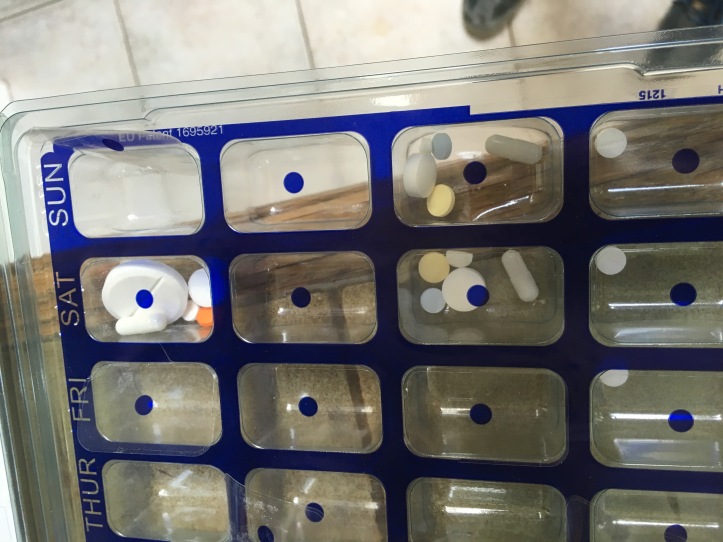 (One of Mum’s dosset boxes is pictured above. I took this photo last Sunday to show the Carer’s Organisation that the girl who came last Saturday did not give Mum her pills. They include a diuretic. And that’s probably why her ankles swelled and she wasn’t able to walk for three days…..but that’s another week…………)

2.05 pm. The Chemist. Sorry! Not quite ready! Just doing them now. We’ll post them through the letter box later!”

“The letter box isn’t big enough, and if I’m not there and you knock, Mum might fall over getting to the front door. When will they be ready?”

3.15 pm. The Chemist. I had picked up the pills, and taken them home, given Mum her afternoon tablets, spotted one was missing from the box, twice a day, every day, and brought them back.

4.15 pm The Chemist. This time I look closely at the boxes before I take them away. I see I’ve missed something.

“Why is the prochlorperazine in a separate box, and not in the dosset boxes?”

“Because the doctor has prescribed them to be taken when needed. I can’t put them in the box without the Doctor’s specific instructions.”

“But I will have to break the seal on the dosset boxes and the pills will fall out.”

“Ok, you can do it here and I will reseal it for you.”

4.30 pm The Chemist. In the dispensing area of the chemist, I break the morning and afternoon seal on 28 days worth of pills, insert half a prochlorperazine table, which will keep my Mother’s schizophrenia suppressed, and the chemist reseals the boxes for me.

5pm. My mother’s home. I reflect on how this happened. In April, before Mum was allowed home from hospital, I asked to look at Mum’s medication list. I noticed that the prochlorperazine had been removed. I asked why. I was told by a young doctor that it was an anti-sickness medication, and that as Mum was not feeling sick it was unnecessary. I had to point out to a Hospital Doctor that this medication is a first generation anti-psychotic, and was keeping my mother from madness. It was also an anti-vertigo drug, and was helping her stay upright. It’s widely prescribed as an anti-sickness drug, but that’s not why Mum has it. “Oh!”, she said and looked it up on her computer. She said she would reinstate it, and she did, but as 3x a day or as needed, for sickness. Since then I have had conversations with the chemist and the doctors at the surgery, and I sent a note to the surgery as the conversations with three doctors had no effect. 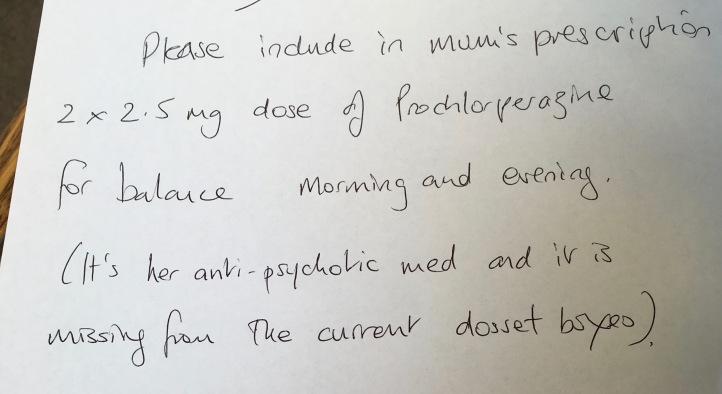 The reply to this note was a letter, saying that the prescription was for sickness.

In a subsequent conversation with this GP, I had to point out to her that this medication’s original use was as an anti-psychotic, and that although it has these other effects, for which it is widely used, it is still a goddamn anti-psychotic and it works for my Mum, for both vertigo, and most importantly, her bloody psychosis. But without the swearing.

“Oh!” she said, “You want an off-licence prescription! No problem.”.

So far every month since April, there has been a problem with this particular medication not being in the dosset  box, not to mention omitted pills because the chemist just forgot to put them in. How hard is it?

And the week went on….