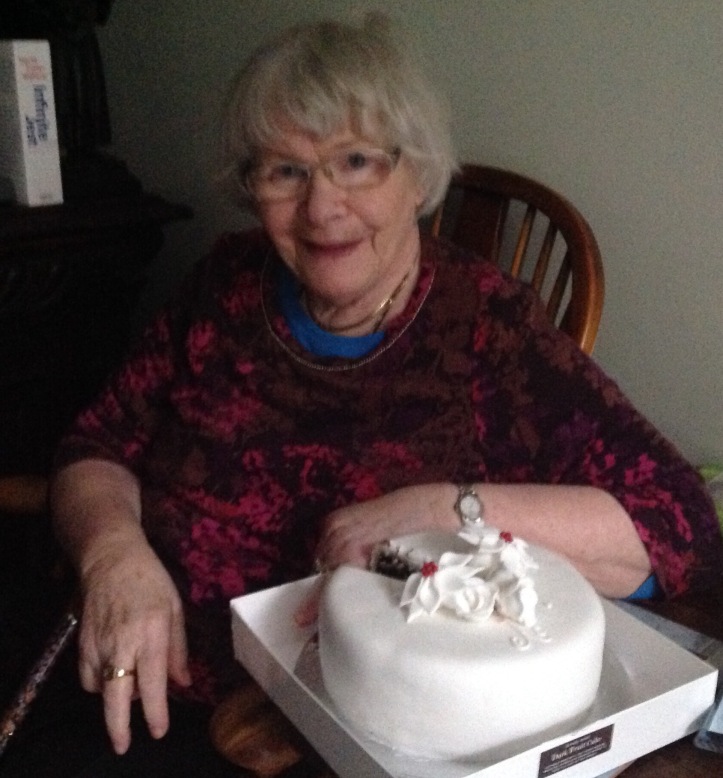 “Get me a bit of fruit cake will you?!”, Mum calls out as I leave for Waitrose.  Mum is cake obsessed and in cake denial, and cake deprived.

“Mum, I am going shopping for ingredients to make us a healthy kale smoothie for breakfast. Billy is staying and we could all do with losing a bit of weight, and this will help.”.

“Did you have much cake as a kid Mum?”

Then she says. “Feck all cake. Sometimes Mammy would get a bag of currants and make currant cake. Not very often. hardly ever. There was a war on. Rations.”

Mum read “Angela’s Ashes” a few years ago. She said that Frank McCourt’s life in the city of Limerick was luxury compared to her childhood in rural Ireland in the thirties and forties, although she did concede that there were potatoes and rabbits in the country, as well as bread. Nanny made bread. Mum didn’t like her mother’s bread and wouldn’t eat it.

“Well we could have as much tea with as much sugar as we liked. That wasn’t rationed in our house. They gave us loads. There were so many of us.”

“So you took sugar in your tea in those days.”.

“No wonder you bloody fainted all the time.”.

In Waitrose there’s a cheeky lad who serves behind the deli counter, who calls out to me, “Excuse me, Madam! Could I interest you in the last of this pickled herring in sweet and sour sauce? It should be £14 but to you, £2.50.”. What an utterly resistible offer. I laugh and say no thanks, and carry on shopping. There is a man who is making an amazingly deep vibrato sort of Tourettes repetitive noise amidst the aisles, and I  follow him round a bit. By now I’ve got my kale, bananas, and nine cartons of almond milk as it’s on a special of £1 a carton, chia seeds, flax seeds, and was half looking for a bit of malt loaf to keep Mum happy, but was trailing round after this fascinating Voice. He was with his family and was able to carry on a normal conversation but always interposed with this deep, deep hum. I liked the deep hum.

The next time I follow him past the deli counter, the boy is trying to flog cake to an Iranian family. “Thirty five quid it was at Christmas. To you, today, less than a fiver. £4.45 and it’s yours. It will be past it’s sell by date tomorrow, but it won’t poison you.” .

It’s a beautiful Xmas cake. Sod it, I’ll have it. I’ll cut it up small and ration it.

“I’ll have it!” I wave. The cheeky lad looks in both directions, but the Iranian family surrender it to me.

I will just have to ration it. Mum can’t walk much at the moment, so she can’t help herself.

I bring it home, and her face lights up so much she glows and the glow is reflected in the pristine icing. That’s worth a fiver.

I would love to have posted a picture of the whole cake, but I had to take Kerry to the vets. My husband was round. I made their dinner and told them not to touch the cake.

When I came back they had touched the cake to the extent of the missing bit in the photo.

They were also astounded by the estimated cost of Kerry’s treatment.  I had taken him to the vet because that morning it smelled like something had died a week ago in his mouth. I washed his face, because he had some remains of one of these warty skin things there, but that didn’t make any difference. I squirted some doggly dental freshener, which he doesn’t like, into his mouth. No effect. Oh dear god, the smell would make you heave.

I took the last appointment, to avoid other dogs, but I was so nervous when I poked my head through the door to check there weren’t any, that I trapped Kerry’s leg in the door. He yelped.

The vet showed me his teeth, covered in grey-black tartar.  That’s Kerry’s teeth. The vet was female and had good teeth. She said, no I couldn’t clean them myself. They are going to have to be hammered and then the tartar shattered with ultrasound. Then she started speculating on what she could do for this warty mass on his ear. She could cut it off and then do some reconstructive surgery which involved stretching the scruff of his neck. She obviously fancied the job. What about the bit at the end of his tail which now slowly extrudes a sort of pale crusty granular stuff. What about that? She shook her head and ran her hand over his coat. He looks lovely as I put him in the bath last week. His coat is mostly soft and black and shimmery silver, and looks nice, but she could feel all the little warty things. Then I pointed out the different sort of lump on his back. It’s the shape of a four leaf clover but four times as big, and solid, and in the skin and pushing out. We were already up to seven hundred pounds.

“I’ll do it for £800,” she said, “The teeth and all the big lumps. He’s got a good heart and he is pretty fit. He should last another couple of years at least. It will be worth it.”

Mum said I should use the internet and get another estimate.

That night Billy was staying and put two bananas in the freezer for our healthy smoothie. I had misgivings about frozen bananas v kitchen equipment, but this was a Braun. It had brawn. I had faith.

I started with the almond milk, apple, kale……then added the frozen bananas. Seconds later it was clear that my faith was misplaced and bits of the Braun were in the smoothie.

So we all had porridge. The dog stopped stinking after just hearing about his operation. The cake is out of reach.

Leave a Reply to Life Going Down Cancel reply